We’re excited to celebrate the completion of the City and County of Honolulu’s conversion of 53,000 streetlights to energy-saving LEDs! Now that all of the streetlights in public roads on O‘ahu have been upgraded, city taxpayers will save a ton of money in addition to other benefits – including increased safety for pedestrians and drivers, improved visibility for neighborhoods, and reduced maintenance costs for the city.

A project two years in the making, Hawaii Energy presented the city with a $1.9 million rebate check in early October, timed perfectly as a kickoff to Energy Awareness Month. Mayor Kirk Caldwell was on hand to receive the check, along with other key contributors, including Johnson Controls, a Clean Energy Ally who financed and managed the project. 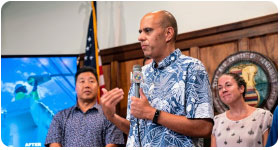 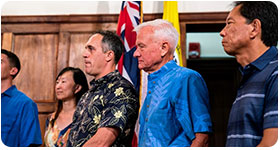 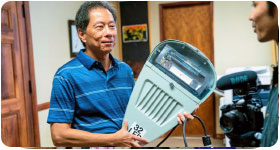