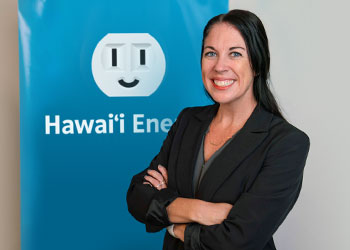 Honolulu, Hawaii – Hawaii Energy, the state’s Public Benefits Fund administrator that focuses on energy-efficiency education and clean-energy initiatives, announced that Caroline Carl has been appointed to serve as interim executive director, effective March 22. Carl will succeed Brian Kealoha who has been leading the Hawaii Energy program as executive director since 2016.

“Over the last 12 years, Hawaii Energy has significantly reduced energy usage in the state and has helped save families and businesses over $1 billion in energy bills. Even though Hawaii has become a model for the rest of the country in energy efficiency, we still have a long way to go before we can achieve 100 percent carbon neutrality by 2045,” said Brian Kealoha, executive director of Hawaii Energy. “Caroline is a well-respected, driven leader who has played an integral role in the success of our programs. I am confident in her ability to grow and strategically evolve Hawaii Energy to better serve local families and businesses.”

Carl joined Hawaii Energy in 2011 as the Hawaii County energy advisor helping Big Island businesses save on their electric bills through education and the adoption of energy saving equipment. She quickly worked her way up the ranks, overseeing the residential and transformational programs in 2013, before transitioning to deputy director in 2015. Prior to joining Hawaii Energy, she coordinated reef education programs and water quality monitoring efforts at the Kohala Center for nearly three years.

Carl received her bachelor of arts degree in environmental studies from McGill University and her master of science in geographic information science and technology from the University of Southern California. In addition to her role at Hawaii Energy, she currently serves on the board of directors for the Hawaii Solar Energy Association and Women in Renewable Energy (WiRE).

Brian Kealoha joined Hawaii Energy in 2016 as executive director. Over the six years of Brian’s tenure as executive director, Hawaii Energy has saved families and businesses over $150 million in first-year energy savings by implementing successful energy efficiency programs, such as the EmPOWER Hawaii Project which helped nonprofits reduce their energy consumption and the Energy Relief Grant that helped struggling small businesses and nonprofits survive the pandemic through grants for new energy efficient equipment that led energy cost reduction. Kealoha will leave Hawaii Energy at the end of April to join VEIC and serve as its chief growth and impact officer.